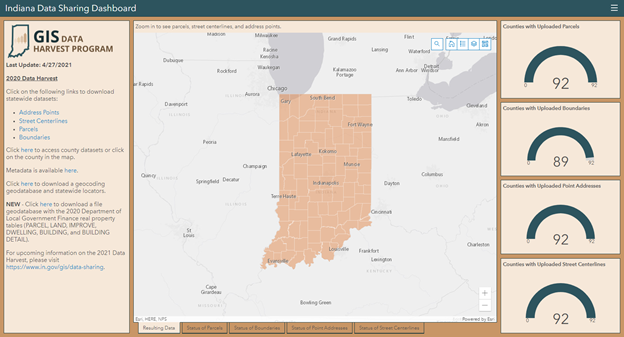 Since 2008, the Indiana Geographic Information Office (GIO) has led the effort to obtain four framework datasets from Indiana counties to generate statewide GIS data layers. These four layers – address points, street centerlines, parcels, and administrative boundaries – are crucial to many activities such as economic development, emergency response, and planning activities.

While the first county agreed to participate in 2008, it took until 2014 for all Indiana counties to participate in this effort. The latest Data Harvest, conducted in the second half of 2020, resulted in over 3.2 million address points, almost 3.6 million parcels, over half a million street centerlines and slightly more than 4 thousand administrative boundaries. That level of data was the result of the most comprehensive participation of counties sharing new data since 2008 with all 92 counties contributing parcels, address points, and streets, and 89 counties contributing boundaries.

For the first time, the Polis Center at IUPUI was a key supporter for the Data Harvest, working in partnership with the GIO. The project started in September 2020 when all counties and vendors were contacted to provide their latest data. From September to December, the Polis Center processed, standardized, and augmented the contributed data with additional information. From January to March, Polis, the GIO, and state partners integrated this data into the state’s internal databases, developed a new statewide geocoder, finalized documentation, and made the data available for download by the public.

Throughout the course of the project, Polis staff updated a public dashboard with the status of each county’s submittals. This dashboard was last updated in April 2021 and includes links to downloadable statewide datasets, county-based datasets, geocoding data, metadata, and real property data.

Some of the major changes in the 2020 effort included:

Polis is already working with the GIO to learn priorities for the next Data Harvest, and with additional partners, including the Indiana Geographic Information Council (IGIC), to determine other opportunities for improvement or inclusion for the 2021 Data Harvest. This will be year two of the four-year contract. This may include the collection of additional optional data layers submitted by the counties, a better way for counties to tie the improved statewide dataset to their own data, and an improved data transfer and hosting process.