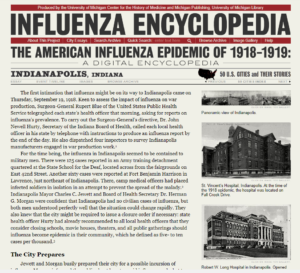 As Indianapolis and the world respond to the COVID-19 pandemic in 2020, it is interesting to consider what other epidemics Indianapolis experienced over the years. The 1918-19 worldwide flu pandemic–considered the deadliest of the 20th century–made its way to Indianapolis in September 1918 when a number of cases in the military were reported. City officials directed closures of schools, restaurants, and movie theaters and prohibited gatherings of five or more people to contain the infection. The city dealt with flu cases and deaths through early 1919. Fortunately, Indianapolis experienced one of the lowest numbers of flu deaths in the nation, which was attributed to officials and residents responding to requests in a unified fashion. Read more http://bit.ly/2IWYbRm