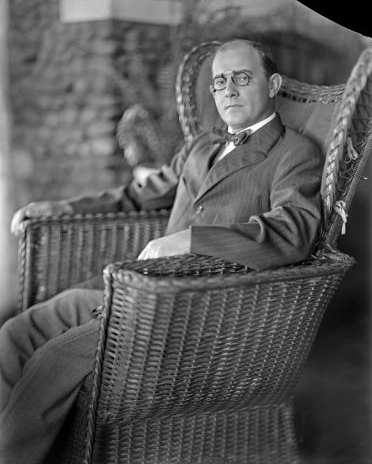 (Jan. 12,1874-July 5, 1939). Born in Greensburg, Indiana, this flamboyant entrepreneur never let his poverty-stricken childhood nor his physical handicap (50 percent blindness) stand in his way Although he quit school at 12 to help support his mother by selling candy on trains, Carl G. Fisher’s flair for promotion and his daredevil personality early brought him wealth and celebrity. At 17 he joined his brothers in a bicycle shop and became a champion bicycle racer and stuntman.

Fisher quickly became interested in automobiles, and supposedly bought the first one in Indianapolis. He raced automobiles before and after the turn of the century, in 1904 setting a world’s record of 2:02 for two miles on a dirt track. An enthusiastic promoter of the new invention, Fisher opened an automobile showroom at 330 North Illinois Street, a three-story structure built to his specifications about 1902. There he sold and serviced Premiers, which were manufactured in Indianapolis, and Wintons. A few years later Fisher moved his operations to 400 North Capitol Avenue, a building that no longer stands.

In 1904, along with engine manufacturer James A. Allison and inventor P. C. (Fred) Avery, Fisher established the Prest-o-Lite Storage Battery Company, which soon made him a fortune. Using compressed acetylene, the system provided a means to light automobile headlamps. Since the manufacturing facilities were prone to explosions, Prest-O-Lite moved to farmland south of the Crawfordsville Road. The plant was located across from the new motor speedway that Fisher, Allison, and partners Arthur Newby and Frank Wheeler built in 1909 for testing automobiles. A balloon race, in which Fisher participated (but did not win), was the first event held at the track. The town of Speedway , which the partners platted in 1912, grew rapidly on the remaining acreage west of the track and the Prest-O-Lite plant.

Fisher helped to found the Hoosier Motor Club in 1902, a group which, among other things, sent out automobiles to scout miles of roads in search of the best routes, with sign erection crews close behind. In the early 1910s the organization joined with Fisher in helping to form the Lincoln Highway Association, which platted and marked the first improved transcontinental road suitable for automobiles. The highway crossed Indiana about 130 miles north of Indianapolis. After that project, he spearheaded the formation of the Dixie Highway which ran from Chicago (the Eastern Route) or Sault Ste Marie, Michigan (the Western Route) to Miami, Florida.

In 1909 Fisher married Jane Watt and established her as hostess of Blossom Heath, the estate he created on Cold Spring Road. (Razed in 2014.) But at the same time that he was trumpeting the Lincoln Highway, the restless Fisher found new challenges in a Florida mangrove swamp out of which he began to carve the resort of Miami Beach. He promoted and developed the Dixie Highway north to south, terminating in Miami Beach where he and Jane built a new mansion. The Fishers kept Blossom Heath for a time, finally selling in 1922. It later became the home of The Brooks School for Boys, forerunner of the Park School before it merged with Tudor School to form Park Tudor. Blossom Heath was demolished by Marian University in 2014.

In 1926 a hurricane destroyed Fisher’s Florida development, which had been his security for financing a new summer resort in Montauk, on Long Island.

Fisher is commemorated to a greater extent in Florida than in Indianapolis. A large monument was dedicated in Miami Beach in 1941.  The Fisher name is prominent in the south Florida geography in Fisher Island, created in 1919 when he dredged Biscayne Bay for land reclamation. An exclusive enclave, the 2015 U.S. Census identified the island as having the highest per capita income in the nation ($2.5 million).